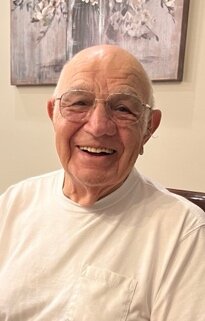 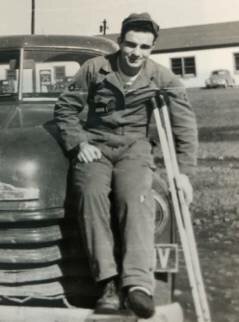 Please share a memory of Albert to include in a keepsake book for family and friends.
View Tribute Book

On the afternoon of December 19, 2022, Albert M. Nardslico, also known as “Big Al” and “Junior” to his
family, departed “for home” at the age of 89 from natural causes. Albert was born on June 26, 1933, in
Scranton, PA to Albert Nardslico and Lucia Marabelle. He was the youngest of 11 children all of whom
have predeceased him. He had a close relationship with his sister Angela Tallarino.
Albert was raised in Scranton and at the age of 19, he joined the United States Air Force where he
enlisted as a firefighter. While serving in Iceland, he was injured on duty and nearly lost his leg which left
him with his signature limp. He remained in the hospital recovering for two years. It was during this time
he was reacquainted with the love of his life, Grace Chickillo (Chickey). He was discharged from duty as a
Service-Disabled Veteran following his release from the hospital.
In 1959, Albert and Grace were married and shortly after, moved to Rome, NY where they lived for 56
years and raised their 4 children. Early on, while raising their young family, Al worked as a janitor at
Griffiss Air Force Base, and to help make ends meet, worked as a chef at The Beeches and The Colonial.
Here is where his love of cooking began. He held two jobs for many years, but never complained, always
keeping an upbeat attitude. Al put his heart into everything he did, including his home-cooked Italian
meals, which warmed the hearts of many families, communities, and service members throughout his
incredible life. Years later, he went on to secure a civil service position at Griffiss as an air conditioning
and refrigeration specialist, from which he retired in 1979.
After his retirement, Al enjoyed life to the fullest. He was a passionate supporter of his children’s and
grandchildren’s professional endeavors and interests. He loved history, gardening, blueberry picking and
travel. He was a deeply spiritual man and his strong faith helped guide him through life.
He and Grace enjoyed winters in Florida for 25 years. His love of travel took him on cross country trips as
well as several visits to his parent’s homeland of Italy.
Albert is survived by the people he deeply loved, his wife Grace, his four children and their spouses
Maryanne (Daniel) Patane, Albert Jr (Terri) Nardslico, Donna (Donato) Ripa, Robert (Diane) Nardslico,
and his grandchildren Carly(Max), AJ(Chelsea), Danielle, Domenica, Nicholas, Maria, Alaina, Dominick,
Anna, Alyssa, Natalie and William, as well as his sister-in-law Gloria (Anthony) Arnese who always made
him laugh, and many nieces and nephews. He was blessed with many friends and cherished his lifelong
relationship with Mike and MaryJane Benedetto.
Calling hour will be held at the Church of St. John the Baptist in Rome, NY, on January 6, 2023, at 11:00
a.m. with a funeral mass to follow at 12:00 p.m. In lieu of flowers, the family requests donations be
made to NardMoor Veterans Home - www.nardmoor.org. or St. Jude’s Children’s Hospital – www.stjude.org

Share Your Memory of
Albert
Upload Your Memory View All Memories
Be the first to upload a memory!
Share A Memory
Send Flowers
Plant a Tree