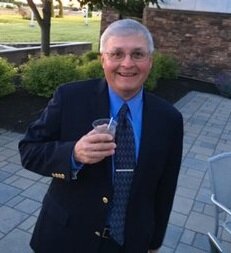 Please share a memory of Robert to include in a keepsake book for family and friends.
View Tribute Book
New Hartford- Robert David Baker, 67 of Oriskany passed away on Friday November 12, 2021 at Faxton St. Luke’s Hospital with his loving family by his side. Robert was born in Rome, NY on November 15, 1953 to the late Alfred J. and Stella (Chmielewski) Baker. Robert attended Rome Catholic schools and graduated with the class of 1973. For 24 years Robert worked at US Airways Reservations in both Syracuse and Oriskany offices. He was united in marriage to the love of his life Sharon Soldato on May 8, 1976 at Transfiguration Church in Rome, a marriage of 45 years. Robert was a family man who enjoyed spending as much time as he could with his children and grandchildren. Robert was involved with the Boy Scouts of America for over 30 years holding positions ranging from Scout Leader to Commissioner and was awarded the Silver Beaver. He loved the outdoors whether it be hiking, biking, fishing, boating, or camping, especially in the Adirondacks. He also loved to travel as much as possible, often visiting family in California and Florida. He enjoyed watching and coaching baseball and passionately followed his beloved Yankees. After retiring from US Airways Robert turned to another passion, doing one thing he truly enjoyed and took pride in, becoming a greens keeper at the Turning Stone Casino Golf Courses. Not only did he enjoy keeping the golf course looking great, but he took the same pride and joy in taking care of his own property always insisting on being the first to mow every year. Robert was a life member of the Stanwix Heights Volunteer Fire Department serving in their fire police and volunteering for countless fund raising dinners. Robert leaves behind his wife, Sharon Baker; children Robert J. Baker, Joseph and Veronica Baker, Kelly and James Bohrer; grandchildren, Carson and Jackson Baker, Joel and Elizabeth Bohrer; sisters-in-law, Diane Dambra, Rosanna Jeffrey, Marchiona White, Sally Soldato; as well as a large extended family and many friends. He was predeceased by his parents and his brothers James and Jeffrey Baker. A memorial mass for Robert will take place at 11 a.m. on Friday November 19,2021 at St. Peter’s Church in Rome, NY. All are invited to call from 10-11 a.m. at the church prior to the service. Arrangements entrusted to Strong-Burns & Sprock Funeral Home. In lieu of flowers please consider a donation in Robert’s name to The Boy Scouts of America or The Stanwix Heights Volunteer Fire Department.