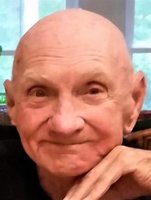 Joseph Francis Duffy, Sr. Joseph Francis Duffy, Sr., 98, formerly of Rome, New York, passed away peacefully at his home in Palmyra, Virginia on Monday, February 24, 2020. He was born on June 2, 1921 in Brooklyn, New York, the son of John J. and Elizabeth Lillian (O’Hare) Duffy. In addition to his parents, Joseph was preceded in death by his wife, Ruth A. (Doherty) Duffy, and grandson, Michael Skinner, II. For the past five years, Joseph has resided in Virginia with his son and daughter-in-law, Royal and Janis Duffy. Prior to retiring in 1975 as an electrician for Marcy State Hospital, Joe served in the US Army Air Corp (1940-1945) and the US Air Force (1946-1949). He was stationed in Panama and served in the European Theatre of Operations in England. Joe was extremely proud that while he was in Panama, he held the 1940 Interservice Lightweight Boxing Title and in 1941 he won the Junior Lightweight Boxing Title. Joseph, a devoted son, brother, husband, father, and grandfather will be remembered for his loyalty, kindness, and gentle, loving nature with a silly sense of humor. He enjoyed the game of golf, the warm sun, and a cold beer. Joe will be greatly missed. In his spiritual life, Joe was an active member of Saints Peter & Paul Catholic Church and a brother in the Knights of Columbus Council #11475 in Palmyra, Virginia. A Mass of Christian Burial will be celebrated at 10:00 am on Thursday, February 27, 2020 at Saints Peter and Paul Catholic Church in Palmyra. Joe will then be returned home to New York to his final resting place next to his beloved wife, Ruth, at St. Agnes Cemetery, Utica, New York. Survivors include four children: Joseph Duffy, Jr. and wife, Eileen of New Hartford, New York, Dawn Cornish of Rome, New York, Royal Duffy and wife, Janis of Palmyra, Virginia, and Edward Duffy and wife Paula, of Rome, New York; 15 grandchildren; 9 great-grandchildren; and 3 great-great grandchildren. The family would like to extend our gratitude and appreciation to Hospice of the Piedmont for their support and guidance through Joseph’s final journey. To honor Joe’s memory, donations may be made to Hospice of the Piedmont, C/O Advancement Dept., 675 Peter Jefferson Parkway, Suite 300, Charlottesville, VA 22911; or the Wounded Warrior Project, PO Box 758541, Topeka, KS 66675-8541. A mass of Christian burial will be held on Monday, March 2, 2020 at 9 A.M. at St. Peters Church, Rome. Family and friends are invited to attend calling hours on Sunday, from 4-6 P.M. at Strong-Burns & Sprock Funeral Home 7751 Merrick Road. Rome. Interment will take place in St. Agnes Cemetery, Utica.